Spiders have an ominous, but often undeserved reputation. Though most spiders are venomous and considered predators, of the thousands of species found 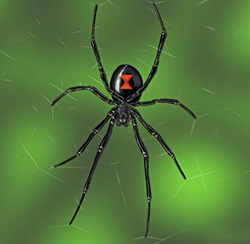 in Canada, few are actually considered a health threat. In fact, spiders are actually helpful in controlling other pests in the home or garden since they feed on other insects and spiders.

They generally bite and inject venom into their prey. Spiders, however, rarely bite humans.

Although spiders are often unpopular, the venom of most species is not very toxic to humans, usually resulting in no more than a slight swelling, inflammation, or itching sensation. Most spiders’ fangs are too small or weak to puncture human skin. Spiders usually will not attempt to bite unless accidentally trapped against the skin or grasped, although some species actively guard their egg sacs or young. 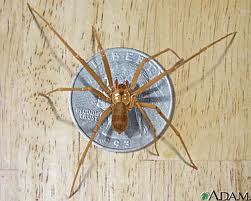 Two spiders that can be a health risk are the brown recluse (pictured left) and black widow (top of page).

One of the most common misconceptions about spiders is that they are insects. Spiders are arachnids and are actually closely related to mites, ticks and scorpions.

Spiders have two body parts (cephalothorax and abdomen), eight legs and usually six to eight eyes, while insects are classified by having three body parts (head, thorax and abdomen), six legs, and generally two compound eyes or up to three single eyes. The average life span of a spider is usually one to two years, but some can live five years and up to 20 years.

Spiders lay eggs within a silken egg sac that is often ball-shaped and either hidden in a web, affixed to a surface, or carried by the female. Spiders may produce several egg sacs, each containing up to several hundred eggs. A spider grows by shedding its skin (molting), usually four to twelve times before maturity. In many species, the mature male often wanders about in search of a mate. Some species of spiders may live for years, but most spiders only survive for one season.

All spiders produce silk, which is secreted as a liquid through the spinnerets and hardens on air contact. Spiders use silk for a variety of purposes, such as making egg sacs, capturing prey, holding prey, making shelters or retreats, and transferring sperm during mating. Also, spiderlings extrude silk threads that enable them to be transported by air currents, a process called “ballooning.”

Spiders are predators that typically feed on living prey. They produce venom that is poisonous to their normal prey of insects, mites, and other small arthropods. Venom is injected through the hollow fangs to immobilize the prey and begin the digestion process. Spiders can only ingest liquids, so they either inject or regurgitate digestive fluids into the prey. They then suck in the digested liquid food.

Spiders use a variety of tactics to capture prey. Some species are web builders that use webbing to ensnare their prey. Others are active hunters that actively search for their prey. Passive hunters are spiders that lay in wait for their prey rather than searching for it.

How to Get Rid of Spiders

The simplest method of controlling spider infestation is to reduce the pest population (other insects) inside the home so they seek a more dependable food supply outside the home. Control of spiders is best achieved by following an integrated pest management (IPM) approach that involves multiple tactics, such as preventive measures, exclusion, sanitation, and chemicals applied to targeted sites. IPM requires a thorough inspection of the building to locate the pest and its harborages. An inspection should be done at night if the species is nocturnal.

An important first step is to correctly identify the spider, as this determines which management tactics to adopt that take into account specific biology and habits. For example, if the spider is a web builder, control efforts should target its web because that is where this spider spends most of its time. On the other hand, active hunters are spiders that move about widely, and some species are most likely to contact insecticide-treated surfaces at ground level.

Within each of the following categories, particular tactics may be more or less applicable, depending on the species of spider:

There are many labeled pesticides for spider control. Some are labeled for homeowner use, while others are labeled only for the licensed, certified pesticide applicator. If insecticides are used, read the label and follow the directions carefully. Cain Pest Control is familiar with the safe use of insecticides and may be the best choice to safely control spiders.

Individual exposed spiders can be killed with a nonresidual aerosol spray, but any egg sacs will be unaffected. It generally is best to use a vacuum cleaner so that the egg sac is removed from the premises.

For web builders, insecticide treatments should be applied so that the chemical contacts spiders in their webs. A nonrepellent insecticidal dust is useful to treat webs because the dust clings to the silk and is likely to be contacted by the spider. Residual dusts can be applied to voids and inaccessible areas where spiders may hide.

A wettable powder or microencapsulated “slow-release” formulation of a residual insecticide can be applied to corners, behind and under furniture, behind stored items, etc. to control active hunting spiders. This approach also is useful to prevent establishment of new spiders. Aerosol flushing agents such as pyrethrins, though ineffective by themselves in providing long-term control, can cause spiders to move about so that they contact treated surfaces.