The body of an ant is clearly divided into three sections: the head, the thorax, and the gaster. Ants are social insects living in 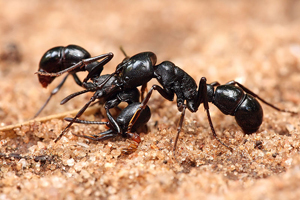 colonies comprised of one or a few queens, and many workers. The queen generally stays deep and safe within a nest. Most ants that you see are workers and these are all females.

Depending on species, workers may be similar in size, or come in a range of sizes. Ants tend to come in dark or earth tones. Different species are black, earth-tone reds, pale tans, and basic browns.

When ant colonies reproduce, the new queens and males may be found in the colony. These are "flying ants" and have two pairs of wings. Males generally have small heads, large eyes, large thoraces, and a pair of claspers at the end of the gaster. Once they fly (and mate), males do not live very long. After mating, new queens break off their wings and never fly again. Without wings, they can generally be distinguished from workers by their larger body size, larger thorax and larger abdomen. All workers are females.

Ant larvae are white and grub like. They have no legs and don't move about much on their own. You can generally see a large, dark stomach through their cuticle. Ant pupae look like white adult ants, with their legs and antennae pressed close to their bodies. In some species, larvae spin silk and the pupal stage is inside a cocoon.

Most ants eat a variety of small insects that they capture, dead insects they happen to find, nectar, or honey dew. They need a balance of carbohydrates and protein. Protein is especially needed for the queen to make eggs and for the larvae to grow.

Most ant species live in the soil. Some, like the carpenter ants, also live in wood (they excavate, but do not actually eat the wood). Some ants live in cavities made inside plants, such as acorns, twigs, and galls.

A variety of reptiles or amphibians (particularly toads and lizards), spiders, other insects such as assassin bugs, and other ants may prey on workers. Bats, birds, and occasionally, people capture and kill or eat the flying males and females.

Some Ants are pests.

A few ant species are considered pests, because they live in and protect territory that we consider ours or because they want to consume resources that we need. For example, leafcutting ants compete with us for crop plants in the American tropics. Fire ants colonize damp grasslands (including lawns!) with alarming ease. Carpenter ants, adapted for living in dead wood, consider the dead wood (lumber) in houses fair game, especially if it is damp. A number of opportunistic ant species can overrun kitchens, pantries, and pet food areas in search of suitable food items. Also, some ants (like their relatives the wasps and bees) have a potent sting. As with bees, some people can become hypersensitive to ant stings.

If ants are becoming a pest on your property, contact Cain Pest Control for a free consultation or for more information about Ants Control in Toronto.