Bed Bugs are becoming a serious problem again throughout the world. They are difficult 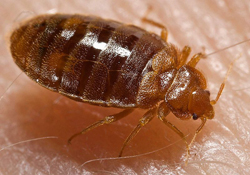 to control but Cain professionals have the experience to eliminate minor or serious infestations.

How to spot a Bed Bug Infestation in Toronto

In most cases bed bugs are not noticed or identified as a problem before someone is bitten by them. Although the bite is painless, bed bug's salivary fluid causes skin irritation and inflammation. Bed Bug bite markings are typically small, swollen and hard white welts. The bites typically cause severe itching that may last from several hours and up to a day. The easiest way to spot an infestation is by inspecting for bloodstains from crushed bed bugs and rusty spots of excrement on bed sheets, mattresses, bedclothes and walls. Bed Bug hiding places often have fecal spots, eggshells and shed skins. If the bedbug infestation is sever, a musty and sweet odor may be detected.

Disease and Health Risks Imposed by Bedbugs in Toronto

In Toronto Bedbugs' primary source of discomfort is due to the skin irritation caused by the injected bedbug saliva during their feeding process. Reactions however, are different from person to person, while some take no note of it, others are unable to sleep due to it. Bedbug bites on arms and shoulders are sometimes the most painful. The itching may be delayed and take up to 9 days to appear, however the most common allergic reactions include the development of large wheals (over a 1cm in diameter) accompanied by inflammation and itching. Most commonly the wheals caused by bedbug bites subside into red spots that typically last for several days. In some cases bulbous eruptions are not uncommon and anaphylaxis may arise in patience with severe allergies. Iron deficiency in infants has been associated with bedbug infestations, it has also been noted that allergens from bedbugs may be associated with asthmatic reactions. Substantial implications point to bedbugs being a potential spread of hepatitis B and wide variety of infections, although it is not official, there is a wide variety of cases supporting the theory. Toronto bedbugs infestation commonly brings anxiety, stress and insomnia.

Bedbugs find habitat in almost any crevice or protected location. Most commonly bedbugs will choose locations in near proximity of their food source (blood), however bedbugs are know to rapidly spread through a residential building, hotel or any other accommodations. Bedbugs are usually found hiding within seams, tufts, crevices of a mattress, box springs, bed frame and headboard.

Cain Pest Control Toronto bedbugs inspection involves dismantling the bed and standing the components on edge. The inspector will be looking for the actual bedbugs and molted skins of the nymphs. Excrement markings are commonly present along the areas of the bedbugs? habitat. The inspector may need to make an incision in the gauze fabric underlying the box springs in order to fully execute a treatment, however in some cases it is better to simply replace the unit entirely. The bedbugs inspection will also scope over all crevices of the bed frame and al cracks, all wall mounted headboards will be removed and examined. All nightstands and dressers must be emptied in order to be fully inspected. Bedbugs commonly find habitat in corners, cracks and recesses. Upholstered chairs and sofas will also be inspected, in particular the seams, tufts, skirts and crevices beneath cushions. Sofas that are used for sleeping may become a major bedbug hotspot. Wall to wall carpeting may also be a common habitat for bedbugs, also the cracks in wood molding, ceiling-wall junctures, behind wall-mounts, picture frames, switch plates and outlets, under loose wallpaper, amongst clothing storage in closets, inside clocks, phones, televisions and smoke detectors. Cain Pest Control will successfully conduct bedbug removal in Toronto, eliminating all bedbugs an their eggs. Although bedbugs tend to congregate in one area, eggs may be found outside of it in small groups. Cain Pest Control specialists pay high attention to detail and will be able to eliminate all traces of the infestation.

If you think you may have Bed Bugs in your home, contact Cain Pest Control for a free consultation or for more information about Bed Bugs Control in Toronto.